What is Extinction Punk?

Extinction Punk is a table-top role-playing game (TTRPG) that blends elements of science fiction and science fantasy to envision a future where humanity fails to stop a man-made extinction event such as a climate cataclysm, a nuclear holocaust, or a biological war.

Players of Extinction Punk get to explore the ruins of an Earth that is no longer under humanity’s control and encounter the (not necessarily) human civilizations that rise from the ashes. Together with the person organizing the game (the Game Master, or GM for short), the players create characters that will fight for survival while searching for powerful artefacts or useful mutations.

All you need to play the game are this Core Rulebook and a set of six-sided dice. The Rulebook contains everything you need for character creation and advancement as well as guidance on how to manage exploration and combat. Additionally, this Rulebook provides guidance for the GM on how to create worlds, monsters, and expeditions for their friends.

So, if any of this sounds enticing to you, continue reading!

What differentiates this game from other roleplaying games?

Extinction Punk and its mechanics are largely based on Apocalypse World by D. Vincent & Meguey Baker and games like it, mainly Dungeon World and Monster of the Week (which are all excellent and you should check them out).

Like those games, Extinction Punk is a narrative-driven, streamlined tabletop role-playing game. Its main features are:

So how do I play?

The game can be played with a minimum of three players. One player acts as the Game Master (GM), while all other players act as characters within the game. These player-created characters are the protagonists of the story that the GM will tell. This means that the GM will act as the guide for the players, setting up obstacles and consequences for their characters to overcome as their adventure unfolds.

Enough Exposition! What do I need to play?

If you are a player, you can lean back and let the GM do all the hard work. The only things you need to do are:

That’s it! Your GM will explain the rules while you play. If you want to lighten the burden on your GM, however, you can also read the general rules in Chapter 2.

So, you are the GM? My sympathies – you’ll have to invest the actual work before the others can play. Most of what you will need is just the knowledge found within this book. To take shortcuts, follow this guide. If you have…:

Extinction Punk features two sets of rules, basic (chapter 2 & chapter 5) and advanced (chapter 4). We recommend starting out using only the basic rules for the first few play sessions. Once you feel at home with the basic rules, the advanced rules are there to help you deepen your experience. 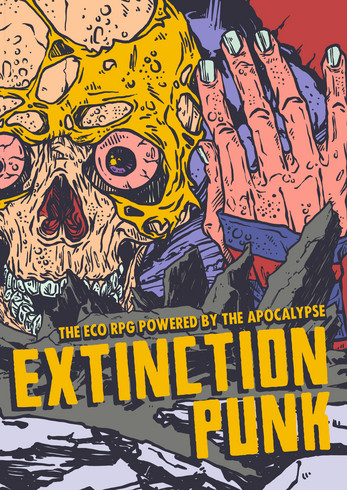 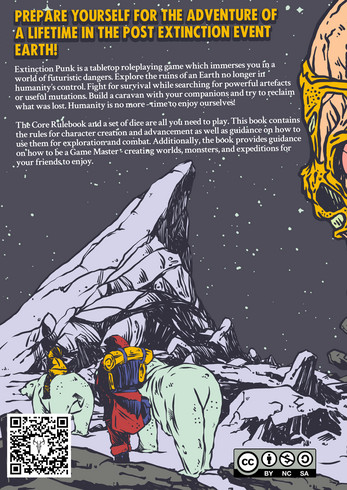 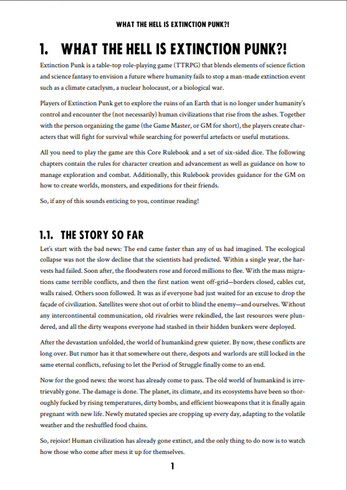 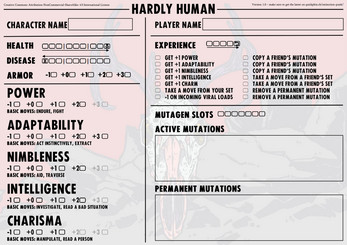 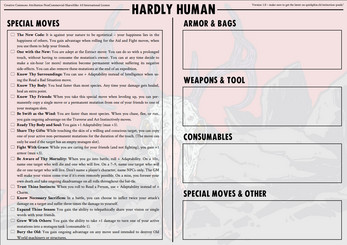